While in Liverpool, I peeked at the race calendar for the Rock n Roll series. I knew that there was a marathon in San Diego the weekend we returned from our trip, and that it was the only 7-hour finish cutoff until the end of the year (others being Savannah or San Antonio). I was pretty bummed that I couldn’t get a finishers jacket from San Antonio since I planned on being at the Cal International Marathon for my husband’s big BQ effort that weekend, so this was a neat opportunity. That, and on our trip we met a nice gal that also lived in San Diego who was also running it, and she was a 2-time Hall of Fame’r! How amazing is that?

I flew in to Denver from Liverpool in the evening on Thursday and was back out again to San Diego on Friday. I enjoyed sleeping in my bed for a few hours before hopping back out on the plane. Sun-drenched San Diego greeted me with open arms and I hurried over to the expo, mainly so that I could quickly get back to a coffee shop somewhere to get some work done. Armed with two race bibs, the weekend was off to a good start. 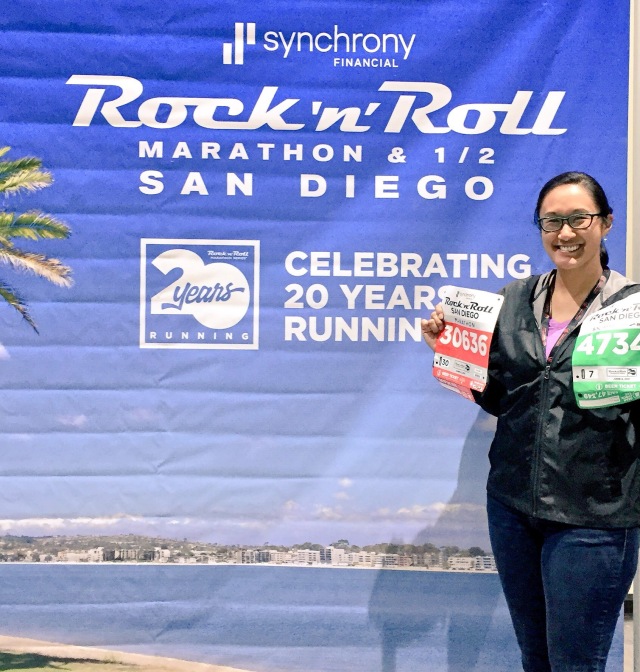 My plan for the 5K was just to have fun and to warm up. I had not ran for a week — since the race in Liverpool — so this was really meant to just shake things out. Overall things were pretty humid, but not hot, which was a really nice change from all of the weather issues I’ve been encountering. 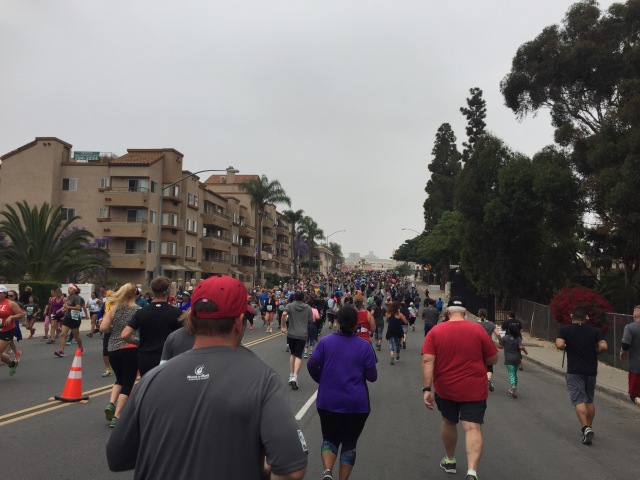 After the race, we caught up with my bestie for brunch, and headed to the expo to grab some last minute supplies. 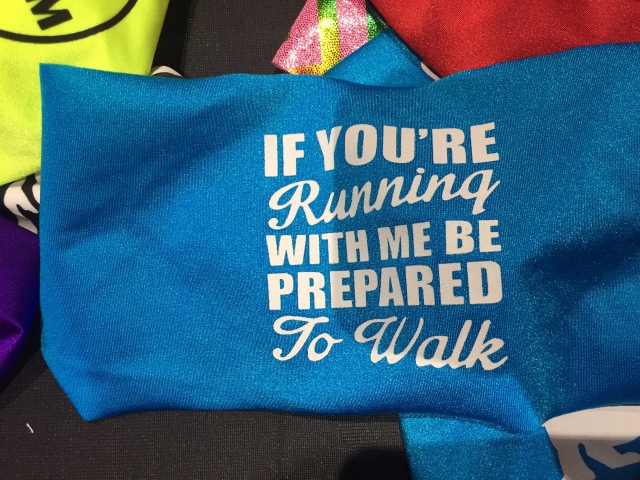 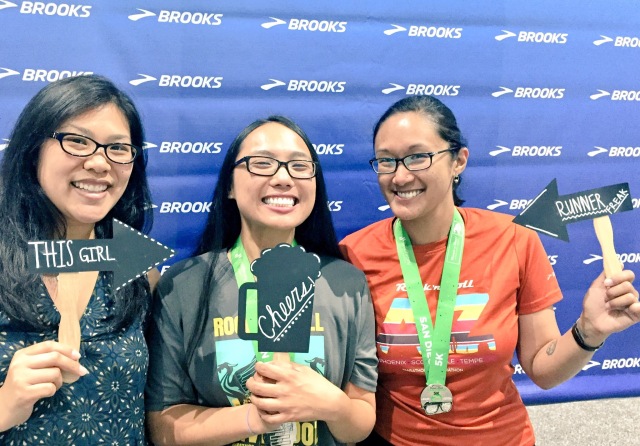 For the rest of the day, I ate and relaxed and got my race gear ready for the big 26.2. It would be my fifth!

My plan was to do my best, but mostly to finish the marathon under the 7-hour cutoff. It was a major concern because my longest training run was on April 15th or so, which was almost 6 weeks prior. I had learned too late that Seattle had a 6-hour cutoff, so I quit training for the full distance and began focusing on the half distance. Now is the time I would put the adage to the test…is it truly better to show up at the race slightly undertrained? Between being slightly undertrained, at having my sleep cycles on and off because of the time change, I had a pretty hefty base so perhaps I would be okay. I would do my best, sticking to my race intervals that I learned from the WDW marathon. Instead of 30-second run-walk intervals, I increased it to 45-second run-walk intervals. My plan also included running through the intervals on the downhills as safely as possible, trotting the uphills if my intervals called for it, and keeping my intervals on flats no matter what.

Thanks to the jetlag and a big bowl of pasta, I was asleep pretty early and got an amazing nights sleep. I awoke at 4am feeling pretty good and headed over to the race start.

I was super excited — this being my very first Rock n Roll full marathon, I was excited to see how different it would be. The big box races seem to bring their own flare to the marathon distance. The bands were placed towards the harder points of the race after the half distance. The motivational banners and posters more helpful. The cheer stations a bit more enthusiastic where needed. I did see some of the water stations being packed up, which is slightly demotivating, but I kept going.

The first portion of the race is always a party, because that’s where the bulk of the racers are I suppose. The photo stops are great.

Some people wonder if you can still run a race for time if you stop for pictures? I personally don’t see why not. It’s your race after all. What was cute was that I even saw a TARDIS, which was like a throwback to my last racecation!

I eventually came up on the half/full split. I’ve seen this in other races where I’ve split off to the half marathon route, and I’ve always wanted to be on the marathon end. This was finally my year. At the 8 mile mark, I still felt good, so I went with it.

After making my way on the marathon route, the party got noticeably more quiet. However, I started noticing that restaurants and coffee shops were opening. People were inside, rubbing the sleep out of their eyes. The scent of cinnamon buns were filling the air. It was very unfair.

So, running on the freeway seems like it would be a faster way to get around during a race. NOT SO. Freeways are graded so that cars can zip up and down those curves quickly, but not humans. So when humans like myself try to slowly run up and down those curves, we do it slowly and at an angle. My ankles went crunch, crunch, crunch, of which my massage therapist and my chiro (later today) will be working out.

I ran through neighborhoods, both real and imagined. Okay, well, “imagined.” 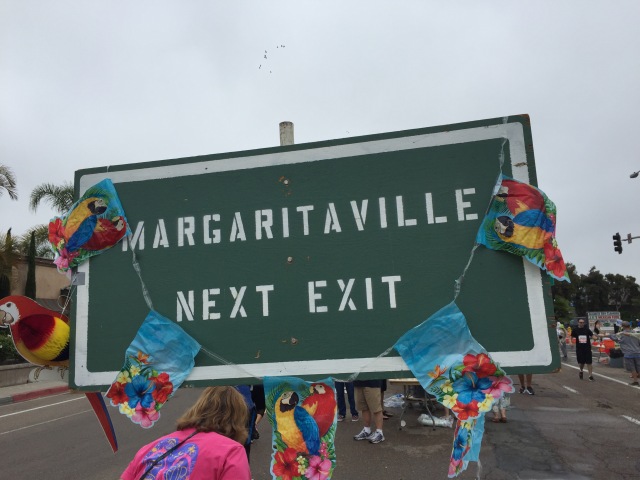 Apparently insurance companies can also set up drinking bars along marathon routes, which is interesting. In most cases they would probably deter things like that.

At the halfway mark I took a screenshot of Runkeeper to save my time – I wanted to have this as a benchmark from my past half marathons to see my pacing and how I was doing. It would be nice if Runkeeper had a lap timer button, or a view that allowed me to see “if she kept going at this pace she will finish a 26.2 in XXXXXX or a 50K in XXXXXX.” Maybe I can put in a feature request?

After this mark I pretty much put my phone away and went to work. It’s where the race began getting difficult. If I were to get truly honest, the race really got difficult somewhere between 18 and 21…sometime around Sea World and getting back on the freeway. I was hurting but not as bad as I thought I would be. I didn’t think I could’ve pushed any harder, but maybe in hindsight I had a little more in me? Probably not. My toes, neck, and back are still recovering and it’s been a few days.

I can rarely muster a smile at mile 25, so I decided to give it a try. It worked, sort of. I kept going. Notice the lack of parallel lines everywhere! My ankles are super angry at me. 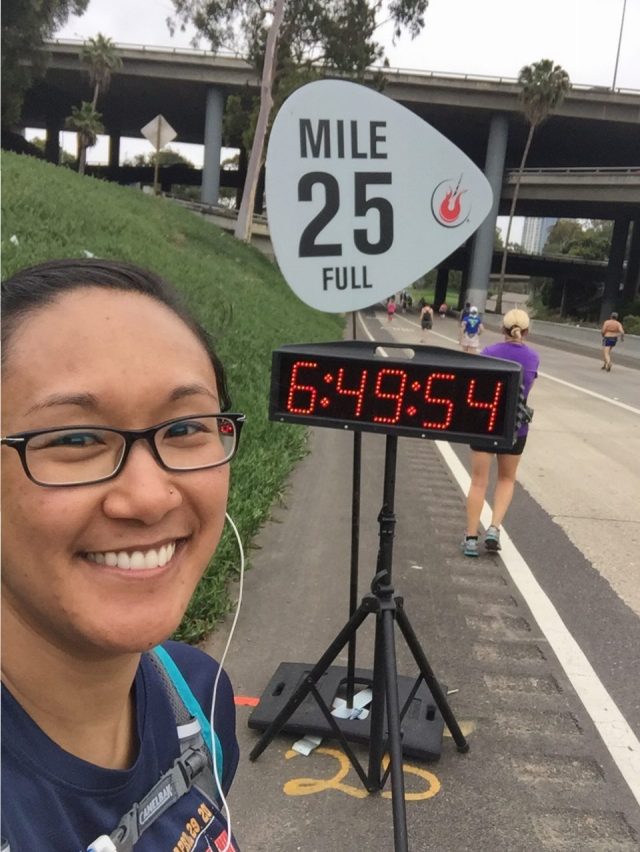 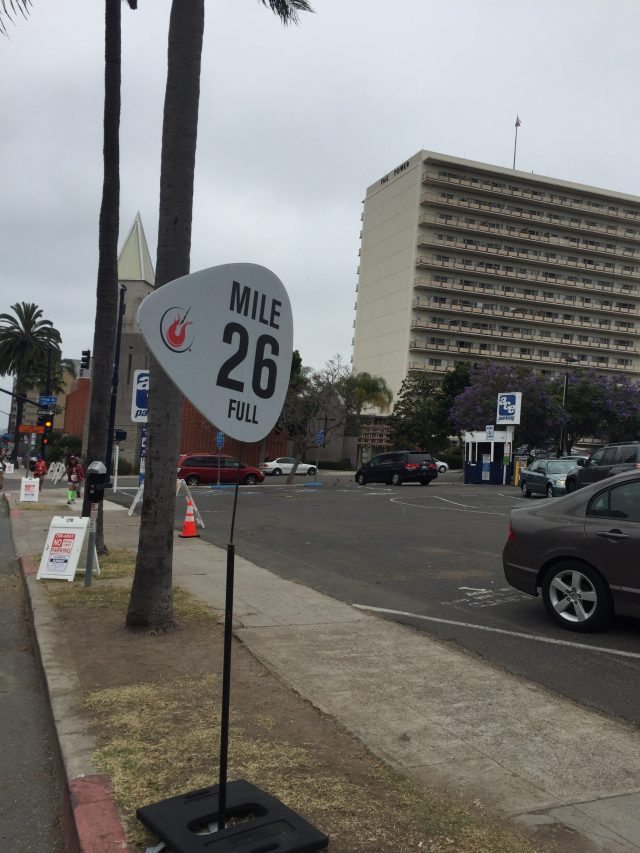 I ran through mile 25-26.2. As I whizzed past the 26th mile marker I snapped this because I couldn’t bother stopping for it. I had a PR I was gunning for!

I had beat my 6-year old marathon PR by 6 minutes 23 seconds.

I worked for it, and I’m thankful for that little raspberry watch on my right wrist that helped get me there. 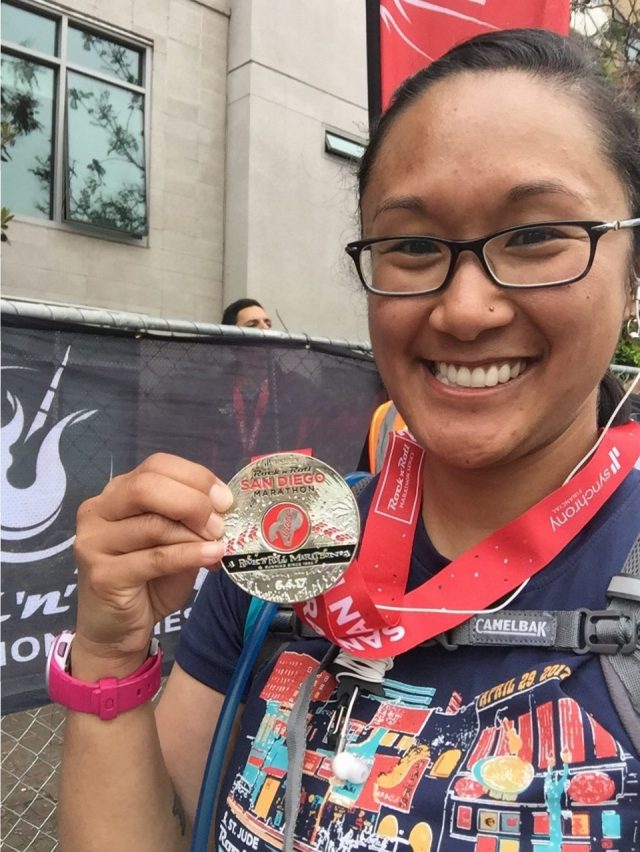 I’m also very thankful for the support of my husband, Erik, and my new friend Arlene, who both peer pressured me into taking on the race and the 7-hour time limit, even though I thought I’d be cutting it a bit too close. For once, peer pressure for good! 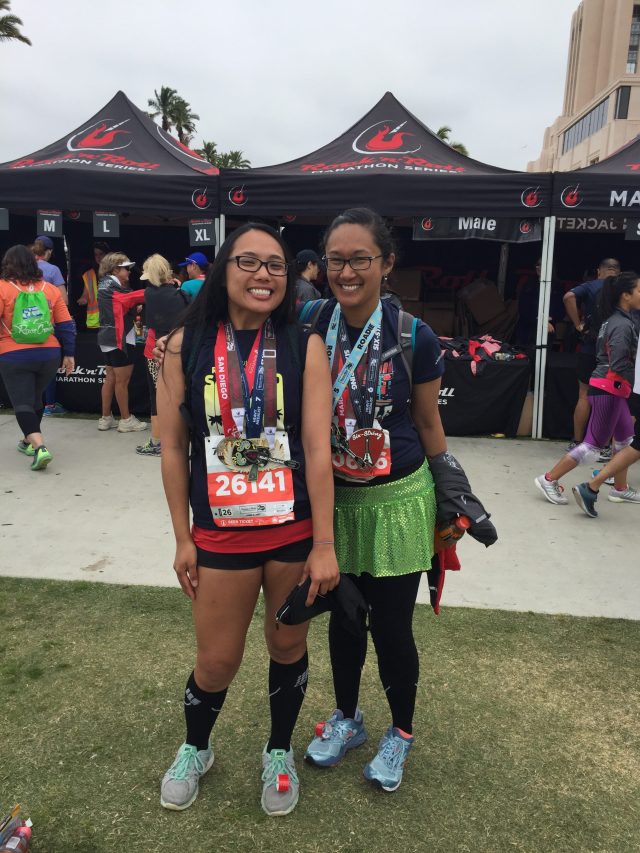 All in all, a happy ending. I know that knocking off this much time off of consecutive races is really hard. My goal time for Rock n Roll Arizona is 5:40, which is pretty much another 40 minutes off my now best time. It’ll be a lot of work, but let’s see if I can’t do it again. I have 6 months to focus on nutrition, sleep, and to be more mindful of my speed training, so we shall see!