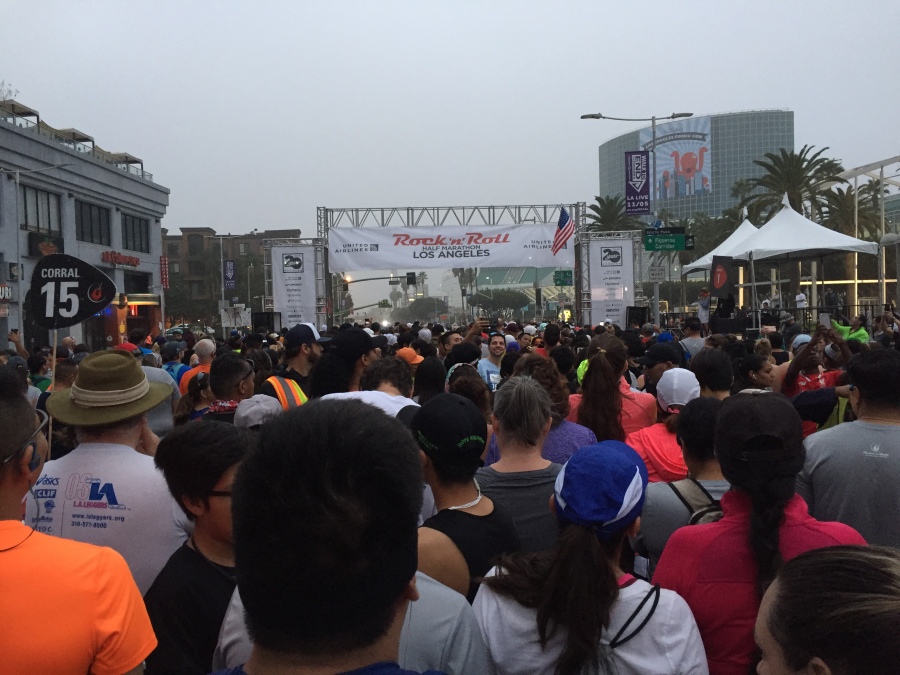 For my 13th race, I headed back to the city that started it all: Los Angeles. It was a bittersweet race that brought back a flood of memories, both good and bad. Being a Halloween race, I also decided to run in a race costume. This race wrapped up a pretty busy month: San Jose, Denver, and LA, which is 20% of my tour if you want to get extremely technical!

Back at home, I did some quick shopping on Amazon for my Cookie Monster costume. I’m not sure why I haven’t bought more workout clothes on Amazon. The workout tank top seemed to be pretty decent, especially at $13 (aff).

I got something a bit larger than usual because I was looking for something to sit lower on my hips, and to be more flowy. I then bought a blue Sparkle Skirt (aff) to complement my tank top.

After I created the eyes and cookies from felt sheets and fabric glue, I safety-pinned everything on and voila! Costume complete!

I packed up my stuff and hopped on my flight back to my hometown. I peeked at the course map – it ran through a few familiar neighborhoods: the downtown area, USC, and Koreatown (one of my favorite places!).

The course has changed quite a bit from my last few races: no more bridge run, nor do we run inside the Olympic Coliseum. Sadness!

We went to the expo and made it in time for a photo op with Olympian Meb Keflezighi. I was thrilled to meet him in person after following his success and watching him do pushups a few feet from the Rio Olympic Marathon finish line. I thought a lot about his humbleness, the wisdom imparted upon his readers from his book, Meb for Mortals (aff), and the work and stereotypes it must’ve taken him to break so many barriers in order to win Boston in his 30s.

I tried to channel my inner Meb on Sunday morning’s run.

On Sunday morning, we headed out to the race start. The Staples Center had plenty of parking, and clean restrooms. A few people snapped photos of my costume, too. We grabbed some quick pics before heading out to the start line.

The race seemed a little smaller than I remember, but that just meant less people to weave around. However, they added two other distances on the same course: a 5K and 10K. Too bad I couldn’t do the remix challenge!

Once the race started, I settled in to a more brisk than usual pace. I had planned ahead of time to shoot for a performance time here in LA, since it was my home city and I wanted to take away something positive here. I went for a consistent warm up until we left USC, and took a quick walk break. I considered taking Galloway intervals all the way to the finish, but then reconsidered. Galloway intervals got me PRs at Arizona (half marathon) and Seattle (full marathon), so why couldn’t I pull that off here? It was perfectly feasible. However, I was looking to shave more than a minute or two off my time. I was looking for a significant time cut, so I decided to give a continuous run a try again, with consistent negative splits. With this course, that was very difficult: 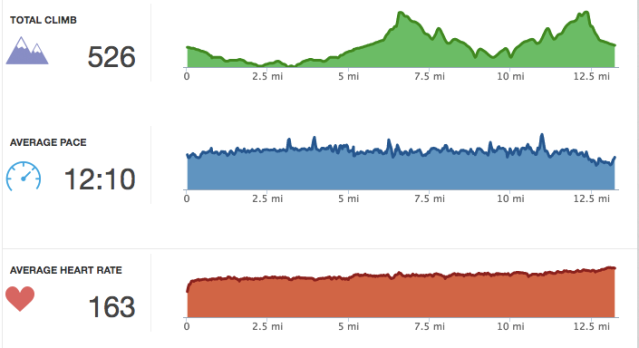 Even through the last mile and the final uphill stretch between mile 10-12.5, I kept pushing my pace. You can see how that affected my heart rate. I kept thinking to myself that this is how people actually collapse at the finish line. I never quite understood how that was possible. I mean, I pushed myself, but not to the brink of a heart attach or anything, but I could definitely see how that was possible if you didn’t keep in check.

I also decided to forgo all photo opportunities to focus on my time (which as you know goes against my 2017 New Years resolutions), but sacrifices had to be made.

We ran past Kennedy Inspiration Park. Although you’d generally find me off to the side, snapping some pics, I quickly glanced at one of the quotes – “Few will have the greatness to bend history, but each of us can work to change a small portion of events.” I thought a lot about that for the next few miles and what that meant for my small corner of the universe – my teaching and my design work. I’m not in a position to make policies that affect people’s lives, but I’m in a position to shape the way students think. I’m in a position to shape the way people expect technology to work. That’s a pretty powerful place to be.

The finish was drastically downhill…like, knee-busting-ly downhill. I survived with generous 8:30-9:45 splits, something I haven’t seen since 2011 in Anaheim during a 5K. I finished the race, red in the face, but happy with a new PR for my 30s.

Now, more than ever, I am happy to have written all of my race recaps…!

It’s 48 hours after the race and I’m still sore from running down all those hills…but I’m still basking in all that glory. I can’t wait to head to Las Vegas and San Antonio to finish the year out strong. I’m so close to the Hall of Fame status, I can see it!